During my research for places to eat while in Paris, I found lots of gluten free places which were open during the day but (apart from Noglu and My Free Kitchen) none of which were open in the evenings. I’d initially discounted going to Biosphere Café but after a very early start, a disappointing breakfast on the Eurostar, and some frenzied checking of Metro lines, I realised I had just enough time to stop by for lunch. 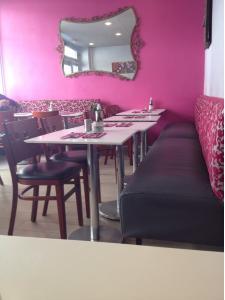 Biosphere Café is located in the 8th arrondissement. Not super central but Paris is smaller than London so travel distances around the city seem shorter. 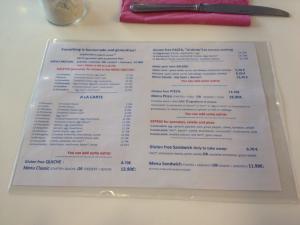 I was seated dangerously close to the chilled patisserie counter. Thankfully there was a glass counter between me and the gluten free chocolate eclairs which were screaming “eat me, eat me” with increasing ferocity. 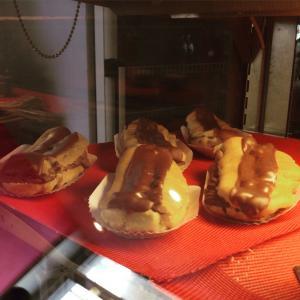 I chose the potato and lardon quiche. It came served with a green salad. Just leaves with a simple dressing. It seems so rare to be served just salad leaves with a meal anywhere other than in France.

I absolutely love quiche. Prior to diagnosis, this would’ve been a regular meal choice for me. Very occasionally I make it these days with a packet of shop bought gluten free pastry, but generally I don’t have the time so I just go without.

As you can see from the photo, the quiche with gluten free pastry was mahoosive. It was also utterly delicious.

Sometimes the simplest meals are the tastiest.

The gluten free chocolate eclairs were still screaming “eat me” when I had a nut close call. I’d asked which of the desserts did not contain nuts. Unlike in the English language, there is no collective word for “nuts” in French. In French, nuts are refered to by their individual names. The word “noix” means walnuts, for example. If you have a nut allergy like me, be prepared to name each individual nut to which your allergic when in France. Having made the mistake of using just the word “nuts” (the waiter spoke perfect English) he returned to ask me if by nuts I might also mean almonds. Um, yes. Lesson learned.

I was too full to eat the chocolate eclair then (I succumbed, of course) so I took it in my handbag for later. Would I travel around Paris on a boiling hot day with a cream filled chocolate éclair in my handbag in the days before being gluten free? I’m thinking not. But I’m glad I did. It was just as chocolate eclairs tasted in my memory, delicious.

Would I go back? Mais oui! Next time I’ll try the Breton galletes.