We booked our trip to Bilbao at the very last minute and managed to find a flight from Heathrow on the Spanish low cost airline, Vueling. I tend to avoid low cost airlines since they generally fly from Stanstead or Luton, neither of which are convenient when you live in south west London. I also think once you’ve added in the cost of surcharges such as seat selection, checked bag and a card fee for the payment, you don’t end up saving much. But the only airlines flying direct to Bilbao from London were Vueling or easyjet. I was quite impressed with Vueling and I’d be happy to fly with them from Heathrow again.

Bilbao airport is quite small and it took no more than 10 minutes to disembark, collect the bag and walk through the controls. Options for taking the 10 minute trip into central Bilbao are either a taxi for EUR 20-25 or the airport bus for the princely sum of EUR 1.30 each. Mr D insisted I left my usual taxi-Queen lifestyle at home and we got the bus. Hmmm.

We stayed at the Hotel Miró on Alameda Mazarredo, 77 which is opposite the Guggenheim museum and within easy walking distance of Bilbao’s shops, restaurants and the Old Town. We got off at the first stop on the airport bus and walked around the corner to the hotel. This hotel is part of the Design Hotels group which are a group of independent boutique hotels. We’ve stayed in a few of their hotels around the world including the excellent Hotel Urban in Madrid and I’ve not been disappointed. Hotel Miro is a stylish, modern hotel which offers free wifi both in your room and throughout the hotel (I am so over paying up to EUR 25 each per day for us to connect our iPhones) and even a free bar to guests. Which seemed like a very dangerous proposition, for the hotel at least!

In advance of our trip, I’d contacted the hotel about gluten free dining options. They confirmed they would have gluten free food available at breakfast for me. When I arrived at breakfast I spoke to waitress and she brought me this gluten free baguette, freshly warmed.

It tasted absolutely amazing with its crispy outside and light bread texture inside. It was especially delicious with some jamon serrano. So good in fact it was hard to believe it really was gluten free. Perhaps I wasn’t the first to wonder this since I was presented the gluten free bread in its packaging! 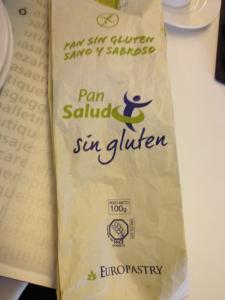 Rooms cost from EUR 110 per night