I found Palermo to be a somewhat challenging city. It’s blessed with beautiful old buildings, full of interesting architectural details. But they’re crumbling, many beyond the point of repair. I guess you could call it a development opportunity but I found it incredibly sad. The city seemed to be completely neglected, not just in the condition of many of the old buildings but rubbish was overflowing out of bins and covering the streets. Even the parks which are usually kept so well in Italy were littered with stray plastic bags, cigarette ends and other discarded bits of rubbish. Like I said, really sad. I hope Palermo’s Mayor or Municipal administration give Palermo some TLC soon because it could be great, it’s just not right now.

A couple of photos of Palermo. 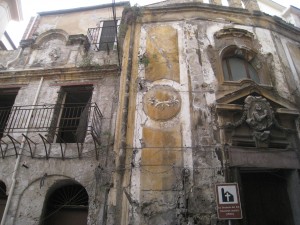 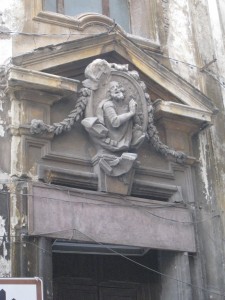 There were lots of street markets all over Palermo selling fresh fruit and vegetables, as well as stalls selling a veritable pile of tat! I really liked this Ape van piled high with artichokes. 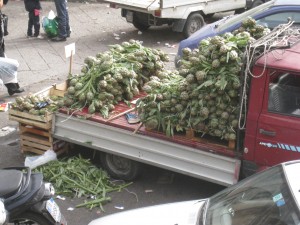 After a day of watching the fabulous Royal Wedding, we asked the concierge for a recommendation on a gluten free pizza restaurant. The concierge called around all of the best pizzerias in Palermo but unfortunately none could do a gluten free pizza. Eventually they suggested Ristorante Pizzeria Naif located at Via Vann’anto 21, Palermo. This is just out of the centre of town in a nice residential area but was easy for us to reach from our hotel. When our taxi pulled up outside Naif, I was not sure it was for us. There was graffiti everywhere. However, having been in Palermo for a couple of days this had become normal, every wall space seemed to be covered in graffiti.

The restaurant was empty when we went in just after 8pm but quickly filled up. The waiter brought the menu: 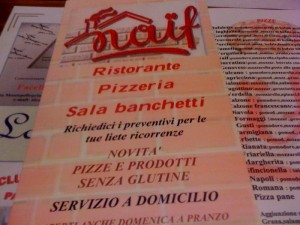 They had another gluten free beer for me to try, Celia: 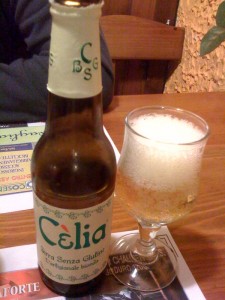 I had a bit of a half Italian / half English conversation with the waiter about gluten free options. He was quite animated about one of the starters that I could have so I decided to go with enthusiastic recommendation and that we’d share it. It seemed to me that it was a plate of chips but hey, what do I know? I barely speak any Italian. With a flourish, our starter arrived and it was….. 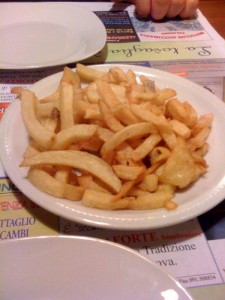 ….. a plate of CHIPS!! We looked around and half the restaurant were also tucking into chips as their starter. I have no idea if this is a Palermo thing but when we ate dinner the following day we noticed the chips for starter thing going on then too. Most odd.

I chose the “Naif” pizza which included sausage, bacon and pepperoni in the topping. 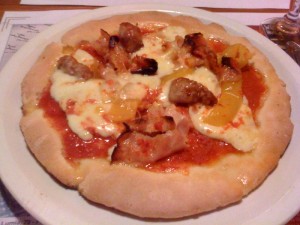 The home-made  base of this pizza was quite interesting. It was the most bread-like of all the gluten free pizzas I’ve eaten.  It was extremely filling because it was very thick and it tasted quite sweet. I liked the pizza and IF you’re in Palermo (but frankly unless you’re visiting your family / roots I’m not sure why you would be) then if you’re near to Naif, I’d recommend giving it a try.