Our European train adventure continued on from Paris on the high speed train from Paris to Zurich which takes around 4 hours and 30 minutes. Our prebooked seats turned out to be next to a couple of crazy American niche vodka distillery owners also on their way to Zurich to stay with friends as part of a whistle stop tour of Europe. They’d flown in from Miami overnight into Charles de Gaulle airport and had raced from CdG (located north of Paris) to Gare de l’Est in breakneck speed. As they sat down next to us breathless and red faced from a stressful transfer from the airport followed by a sprint through the station to the train, I thanked my lucky stars we were taking a relaxing train journey all the way from London to Milan. The train sped at almost 200 mph hrough the beautiful French countryside, on through the slightly more industrial Germany, and then we finally arrived in Zurich and bade farewell to our fun travelling companions.

A short taxi ride took us up the hill to our hotel, the Dolder Waldhaus. For some very odd and unfathomable reason I LOVE funicular railways….and this hotel had one going right into it! Awesome. Having checked in we decided a long day of doing nothing but chatting, reading and watched the view speed past us had left us a bit tired so we headed for the hotel’s restaurant. Hopes weren’t particularly high but they had an outside terrace overlooking Zurich and it was a nice evening. As usual I explained my dietary restrictions, the waiter nodded and I thought I heard him say “I’ll get the gluten free bread”. No way, I thought, you must be imagining it. But no, the waiter reappeared and placed some freshly warmed gluten free bread in front of me. What are the chances? 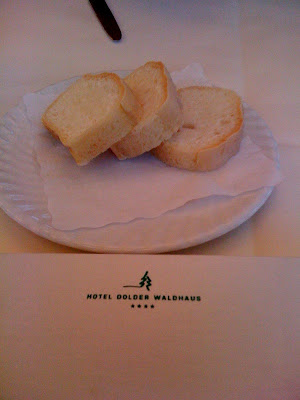 The waiter very helpfully pointed out what options were available on the menu. Their menu was half Swiss, half Thai. Not a combination you would probably find anywhere else in the world but it turned out they had a Thai chef. So, I chose a Thai beef salad for starter: 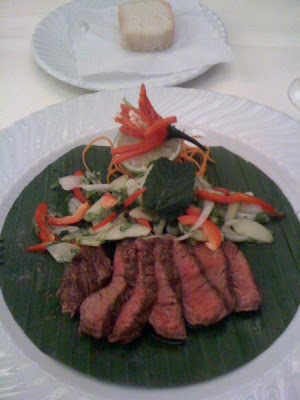 This was absolutely delicious and all the main key flavours of Thai cooking, spicy, salty, sweet, sour were evident in the dish.

For the main course I had gorgeously ginormous skewered prawns. This dish should have been served with roast potatoes but the waiter – who genuinely took my food intolerance seriously – advised against as they had been dusted with flour before roasting. Instead they served with boiled potatoes and a selection of grilled vegetables. 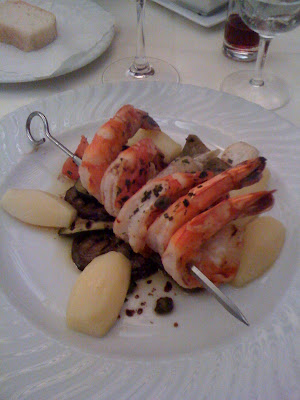 The following night we ventured into Zurich city centre for dinner. Having spied the beer quarter setting up for what appeared to be a very heavy night with trestle tables and hoses for the morning after (seems like those Swiss bankers wind down at the end of the working week with a LOT of beer) we decided to give that area a miss and went in search of something a bit more romantic for a wedding anniversary trip and less stag-do ish. After a bit of searching we came across the homely but buzzy Rosaly’srestaurant. Again the waitress was extremely helpful and suggested steak was going to be my safest option from their menu. But, I did get to eat that fantastic potato and butter Swiss dish which is naturally gluten free, rosti. Living gluten free is not so bad after all… 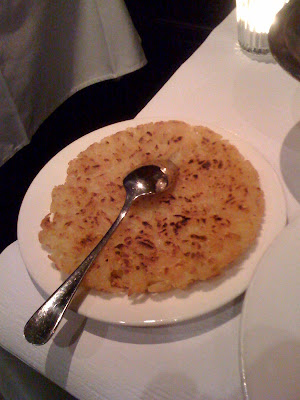 One aspect of overseas travel I really enjoy is checking out what the local supermarkets and markets have in store. I enjoy finding new fruit and veggies I can’t find at home or exciting looking cheeses and hams. We visited a few small convenience style supermarkets both in the centre of Zurich and also near to our hotel. In truth, I was a little disappointed in their selection of gluten free goods as we’d been so well looked after at the hotel and in the restaurants we ate in I thought I’d find some great new products to try. We did visit a large supermarket near the train station but all I found in there were some lonely Schar white rolls. I’d heard good reports on the availability of gluten free products in Swiss supermarkets so I was surprised not to find any of note.

One final note. In the hotel when I went for breakfast, the waiters remembered me and more warm gluten free bread was produced for me to have with…….Nutella!! Well,it would be wrong not to eat chocolate in Switzerland, right?