When you think of Italy, your mind automatically conjures up images of delicious looking and smelling pizza, pasta, foccacia, breadsticks, peroni beer…..basically gluten packed food. There are a few things in life I’d wish I’d known earlier (perhaps before my Italian wedding AND honeymoon)….Turns out how easy it is to eat senza glutine in Italy is one of them…

Mr D decided to indulge me for our 1st wedding anniversary and we booked a table at a gluten free pizzeria for our anniversary dinner. I had originally wanted to dine at the Be Bop Cafe and art deco style pizzeria I’d read a lot about before travelling to Milan. Unfortunately, Italy, August, well everything is more or less shut so after a few frantic calls by our hotel concierge, a table was booked at Le Specialita located at Via P. Calvi 29, Milano. In truth the slightly plain restaurant frontage didn’t exactly fill me with warm fuzzy feelings for an anniversary dinner but step inside and – wow – we were almost knocked over by the warmth and hospitality of this friendly family run restaurant. Despite it being a Sunday evening and the restaurant not being centrally located, the place was heaving with local Milanese having a great time. Ours was the last table remaining unoccupied. Good job we booked.

When the hotel made the reservation they must’ve told the restaurant I couldn’t eat gluten because the waiter immediately brought me a menu and instructed me what I could eat. Guess what?? Nearly the WHOLE menu could be made as gluten free. And that included pizza!

The menu was so extensive I needed a drink to get over my shock and help in the selection process. What’s better with a pizza than beer? Gluten free beer, of course! 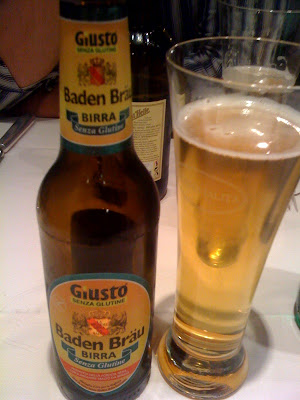 So, beer in hand I finally selected a pizza with Gorgonzola and a locally produced Prosciutto Crudo. As we sat waiting for our pizzas to arrive, soaking up the buzzy atmosphere I realised Mr D had become transfixed by something over my shoulder. No, not a leggy Italian supermodel, it turns out. But the huge wood fired pizza oven out of which pizzas were emerging steaming hot and freshly baked to have the prosciutto sliced directly on top of the pizzas. My pizza it turned out. Crikey. 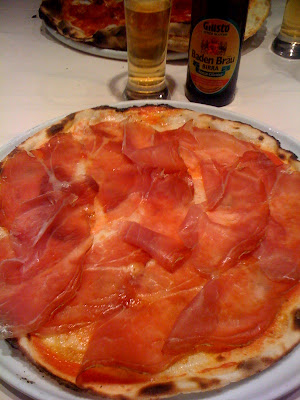 So how did it taste? One word. Amazing. Thin crust, baked in the wood fired pizza oven with chunks of intensely flavoured Gorgonzola with truly delicious prosciutto crudo reclining majestically on top.

After that I decided to have a semifreddo for desert. A chocolate one: 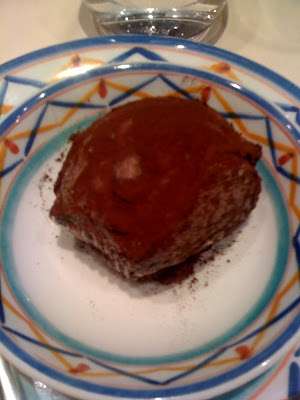 I was well and truly stuffed after all this but then the waiter appeared with a jar full of Amaretti biscuits, well, who would refuse? I’ve later discovered these delicious almond packed biscuits normally don’t contain gluten, which I hadn’t realised. 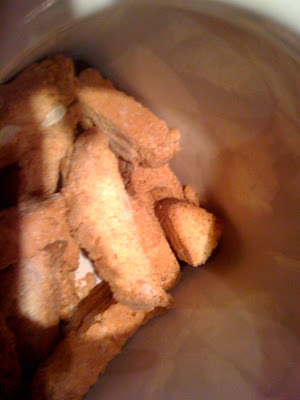 If you’re looking for a place to eat gluten free in Milan, I thoroughly recommend Le Specialita. The food and atmosphere were both fantastic. Really can’t wait to go back!

Eating senza glutine in Italy is really easy. In Italy, there is a Coeliac screening programme in operation for young children upwards and so help (medical and financial) is delivered to those diagnosed with Coeliac disease. Are you listening NHS? Importantly what this screening programme also means is that there is a great awareness of Coeliac disease amongst the general population. Even with my very limited Italian language skills, I found saying “sono Coeliaco” (pronounced “chee-lee-a-ca”) got the message across absolutely everywhere we ate. Not once did a waiter ask me the equivalent of “You’re WHAT? Silly yak??”. They immediately nodded their understanding and noted which items on the menu would / would not be suitable for me.

And at least Mr D knows where to take me for our 2nd year anniversary!