After checking into the Hotel Miro, we walked past the Guggenheim museum and Jeffs Koons topiary dog, into the Old Town along waterfront, checking out the signs of Bilbao’s regeneration along the way. Bilbao’s old town (Casco Viejo) is a mix of buildings dating from the 15th to 19th centuries and is situated on the east bank of Bilbao’s river Nervion.

Although San Sebastien, located 60 miles east along the northern Spanish coast, may be better known as a foodie mecca with three (of Spain’s six) 3 star Michelin restaurants, Bilbao takes its gastronomy seriously. Pintxos are the Basque region’s version of tapas, albeit far more elaborate than tapas you’ll find in other regions of Spain. Would we be able to find some gluten free options for me, I wondered? We started at the Plaza Nueva where Gure Toki, the 2011 winner of the annual pintxos completion is located (yes, they really do take pintxos seriously around here!) along with many other pintxos bars. I think this square would be a fantastic place to sit outside and try pintxos like the locals (usually a txikiteo or bar hop between 7 and 9pm before going out for dinner) with a glass of the local Txakoli white wine. But perhaps not in February!

We wandered through the quaint old town streets and stopped at Berton (C/Jardines 11). Could they offer any pintxos sin gluten? No, came the very definite reply. There was nothing on the counter that was gluten free and I wasn’t so hungry as to ask them to make a gluten free alternative sin pan. Nevermind, a good glass of Rioja always helps. As we sat enjoying the wine, a mighty plate of jamón Iberico was delivered to the next table. Now that, that would do nicely.

Salty, sweet, moist and cut thinner than a sheet of paper. I have never tasted ham like this.

We saw these beauties in a store close to Berton and considered over several more glasses of Rioja whether we could bring one home with us.

As the day continued, we saw increasing numbers of people dressed in ever more elaborate costumes. It created a really fun atmosphere as we saw whole families (including tiny babies) dressed as smurfs, clowns and Pirates along with the odd Buzz Lightyear. Spiderman suits must have run out in the region as every 5 year old appeared to be wearing one!

Send in the clowns!

An entire family of witches. Even the babies in the buggies were dressed up! 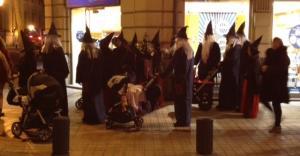 We later discovered it was carnival that weekend in Bilbao. We joined what appeared to be the whole city in watching a procession of floats trundle slowly pass us. We felt really lucky to have stumbled upon Bilbao on carnival night. 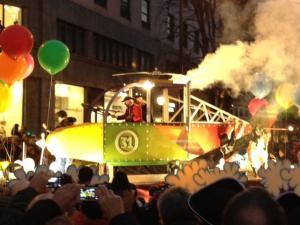 The Guggenheim museum was the big attraction for us travelling to Bilbao.

I’ve wanted to visit since it opened in 1997 but somehow never made it. We picked up the hugely informative free audio guide which described the building’s construction and the art works it contains. I was amazed to learn that the initial design for the iconic titanium clad building – instantly recognisable to anyone with an interest in art or architecture – was drawn by Frank Gehry on the back of a hotel envelope. The art works on display are mainly mid 20th century onwards and the audio guide provided a truly excellent commentary on the gallery’s art. I particularly enjoyed the Fish Gallery with Richard Serra’s huge participational steel installations.

Sunday morning spent at the Guggenheim was the highlight of our trip and, for me at least, reason alone to return to Bilbao.