I was really pleased to be invited by Caleigh who writes the fantastic Gluten-free(k) blog to participate in this year’s “Free From and Festive”. Christmas can be a tricky time of year for those with food allergies and intolerances as not everyone fully understands how to cook safely. Unfortunately even those who do, occasionally make mistakes when their mind and energy is being taken up on the madness that the run up to Christmas can be. Not thoroughly checking a label on an element of Christmas dinner could mean you need to miss out. 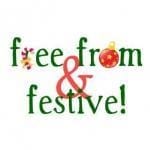 However, I have a small confession to make. You see, I’m not really that keen on Christmas. This time of year always reminds me of sad times and I’ve never been able to muster much enthusiasm for it since I was a teenager. As an adult my best Christmases have been the unconventional ones; drinking too much Russian champanskoye at the National Hotel, Moscow with a big gang of mates watching the snow fall on Red Square; steak and chips at Chez Gerard, Heathrow en route to Australia (cheap flights if you’re willing to fly on Christmas Day); and last year’s amazing steak and red wine fest in Buenos Aires. Oh, and I don’t even like roasts very much!

But there is one part of the Christmas dinner which I do really like, stuffing. Is this odd? Perhaps. I particularly like the taste of the herb, sage. I rarely use this herb to cook with but I love the aroma and taste of it. Just the thought of those the little stuffing balls that explode with more flavour than turkey could ever dream of is something I do look forward to about Christmas lunch.

Unfortunately finding gluten free stuffing can be quite tricky. I’ve selected three possibilities below which either you, or those catering for you, can safely include in your gluten free Christmas lunch.

Mark and Spencer have made great efforts over the last year or so in re-formulating many of their products which did contain gluten to be gluten free. Their packaging has also been improved, with gluten free items being clearly marked on the front of the packet with a crossed grain symbol (seen in the photo below). Top marks to M&S for providing such a huge range of gluten free sausages, stuffing etc. The whole family’s stuffing and sausage needs for your Christmas lunch could be purchased from M&S meaning no concerns about which items are suitable and avoiding cross contamination.

I tried the “Pork & Caramalised Chestnut Stuffing” priced at £1.66 to serve 4-6 people. 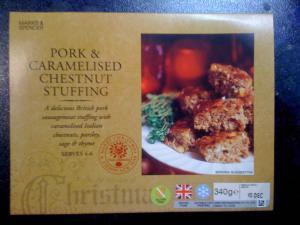 I chose this stuffing to try because I would never go to the effort of making this with chestnuts and pork sausage meat. I’m also sure that I could never produce a homemade version of this stuffing for the price of £1.66 either. 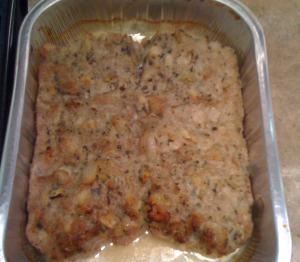 I enjoyed eating this meaty stuffing which tasted sweet from the chestnuts. Whilst it did have a hint of sage, I would have liked a stronger sage flavour. However this is probably just my personal preference.

2. The independent local producer – The Foodamentalists

I recently tried some of The Foodamentalists delicious Frangipane Mince Pies and was keen to try more of their products. Sadly I don’t live near to their base for me to pick up from local stockists (detailed on their website) but you can order online for nationwide delivery. 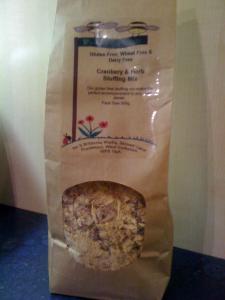 I tried the Cranberry and Herb Stuffing mix which is gluten, wheat and dairy free as well as being vegetarian. This is priced at £2.95 but you get two servings of stuffing from the packet. I made 15 stuffing balls from one serving. 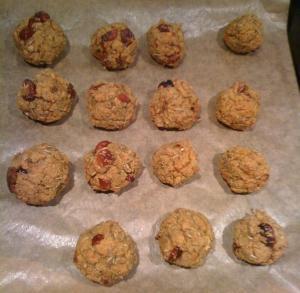 These stuffing balls were very fragrant and I could really taste the sage in them. When they were cooked, the outside of the stuffing ball was a slightly crispy and I thought this was great with the soft texture of the roast chicken I was eating. I particularly liked the cranberries in the stuffing mix because they added a burst of sweetness.

I decided that I’d give making my own stuffing balls a go. How hard could it be? Not very, as it turned out. I used the following:

Start by gently frying the onion in the butter on a low heat until the onion is translucent.

Prepare your breadcrumbs. I don’t have a food processer (as far as I know my beautiful KitchenAid can’t do them) so I went old school….I grated them on a cheese grater. I was completely surprised by how well this worked.

Once the onions are ready, mix them in a bowl with the breadcrumbs and chopped sage leaves.

Season with salt and pepper. Add in enough egg to bind the mixture together. For me, this didn’t require the entire beaten egg.

Roll up into balls. Bake in the oven at 170C for 30 minutes for a crispy outside, slightly less if you prefer.

The punchy taste of sage, the buttery onions and the crispy outer shell of the stuffing balls made these delicious.

For more Free From and Festive recipes and Christmas ideas, please check out Caleigh’s blog here.