When I first started writing this blog 18 months ago it was just me and my laptop curled up on the sofa. My only intention for this corner of cyberspace was to park a rather random slice of gluten free product reviews, news and places. Lots of other blogs helped me along the gluten free way and I wanted to record and write about the things I discovered in case it could help someone else.

What I didn’t know as I tapped away alone on my first few blog posts was how many opportunities would come my way. Just through writing this blog I’ve met some amazing, interesting people both in cyberspace but also in real life and in all sorts of different situations. This is something I did not expect. I’m reluctant to list out all the people this blog has introduced me to for fear of missing someone out (but those for those of you I’ve met, a huge hello!). So it was with this thought that I pushed open the red door to the Scandinavian Kitchen on Great Titchfield Street in London for an informal blogger get together.

I descended the stairs and sitting at the communal table were Annie (of Annie’s Supper Club fame) and Alex Gazzola (@HealthJourno) both of whom I’d had had the pleasure of meeting before. The get together was hosted by Monika Agorelius who is responsible for Fria’s PR in the UK and we’d met at the Allergy Show back in May. Also there were Fiona and Irene of Gluten Free Guerrillas. I was really pleased to meet them, I follow their tweets and like the discussion they promote through their forum. I also got to meet Eleanor who writes the excellent Eating Like a Horse blog.

Monika and Jonas of the Scandinavian Kitchen had laid on a great spread of Fria breads and Scandinavian treats for us to try. A huge thank you again to both for hosting the evening. Another blog post is to follow on the really delicious Fria bread. 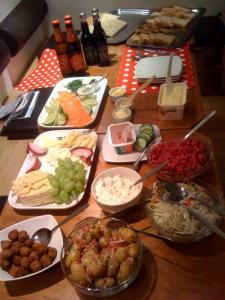 For those of you who haven’t come across Fria yet (and THAT Swedish gluten free chocolate brownie, the kladkakka!) they are an award winning family bakery based in Sweden set up in 1996 and are now the biggest an most successful gluten free bakery in Scandinavia. All Fria’s products are baked in a dedicated gluten and dairy free environment. A list of Fria’s current UK stockists follows at the end of this post.

We departed the fun evening after a good chin wag with each of us clutching a goody bag containing Fria pizza bases and quite a few other treats. A few weeks later we decided to have pizza night and I got to try the Fria base.

So how did the gluten free and dairy free Fria pizza base taste? I would normally (when I can get a gluten free pizza, that is!) opt for a thinner Italian style of base than the Fria one. But what impressed me that this pizza base was in fact quite light in texture. To me the Fria base tasted very different to the dense, thick crust pizza bases from my gluten filled days. I was also surprised that my knife just slid through it. Remember the days of hacking through gluten filled pizza bases so hard your fingers turn scarlet from the effort? Not with the Fria pizza base.

The Fria pizza bases come in a pack of 2, frozen. I wasn’t entirely sure how long they would take to defrost but it took around half an hour. I thought the taste and texture were much more appetising than I expected from a frozen pizza base and liked the option to add my own toppings so I can choose the quality of the ingredients. The fact these are frozen and defrost quickly is a big plus for me because I can buy and store for whenever the pizza mood takes me. I’ll definitely be buying them in future when they are released soon in the UK market.

I chose to decorate my Fria pizza with a scraping of La Scala chilli paste, small slices of mushroom and orange pepper, halved cherry tomatoes (because a meal’s not a meal without tomatoes in my book!) Buffalo mozzarella and a sprinkling of wild oregano. Ta da!

The pizza took about 12 minutes to cook and tasted läckra (delicious in Swedish). 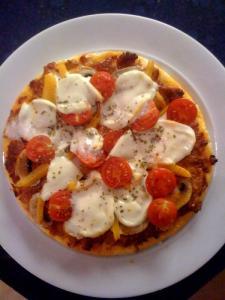 Do you write a blog? What good surprises has blogging brought to your life?

(Note: not all the retailers below stock the whole Fria range, the largest range is TotallySwedish, Scandinavian Kitchen and GFF)