As we arrived at lunchtime we thought we’d try somewhere new. We found a branch of Ask Pizza and I was happy to see they are now serving gluten free pasta. Sadly, all the tables were taken so we moved on.

We then came across a Zizzi. We’d had lunch at the Zizzi in Whitstable last year on the Saturday of the annual Oyster Festival. The service had been amazing and I’d had a tasty meal which the waitress had been very helpful and accommodating in talking through the menu options which could be adapted to be gluten free. I’d been really impressed, if Zizzi’s could offer such a high level of friendly and competent service during what surely must be Whitstable Zizzi’s craziest weekend of the year, I wanted to see what it would be like on a normal day.

The Zizzi in Chichester is housed in an attractive building with high ceilings and a huge open kitchen with a big pizza oven. The chefs were impressing some small kids with their pizza base making skills. I watched as the waitress pulled over a couple of chairs for the excited children to stand on to get a better view of the chefs at work. Nice touch.

I’d heard Zizzi were now offering gluten free pasta so I was keen to try it. The waitress brought me the regular menu and the allergy list to view. The waitress eagerly told me they had not one but two types of gluten free pasta. I was offered either fusilli or spaghetti pasta both of which were made by Dove’s Farm.

My only criticism of Zizzi is that the allergy list is really confusing when substitutions are made, such as gluten free pasta for the regular pasta. (Click here for the online version although you will need to click on the full menu to see all of the pasta dishes which are available gluten free). 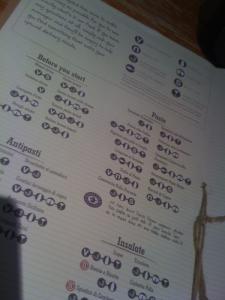 On the allergen menu all pasta dishes are listed as containing gluten, yet this isn’t the case if gluten free pasta is substituted. The waitress advised that all Zizzi’s pasta sauces were gluten free when served with the Dove’s gluten free pasta (more on that later). Dove’s have a great selection of very tasty pastas. Worth clicking on the link here to view the full range of Dove’s pasta.

Since it was a day of new things, I decided to try something different. I went for the Casareccia Pollo Piccante which was a spicy creamy chicken dish with spinach and baby plum tomatoes. I selected the gluten free Dove’s spaghetti with it. 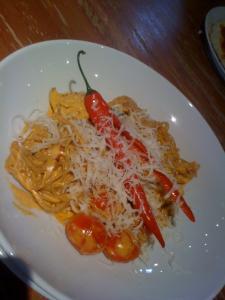 I usually avoid cream so would instead opt for pasta with a tomato or pesto based sauce but that day I fancied something warming. So how did it taste? The sauce was spicy but, despite the ominously ginormous chilli nestled on top, it wasn’t too fiery. Satisfying and tasty. The Dove’s gluten free spaghetti tasted very close to regular version of pasta and I will definitely buy some of the Dove’s spaghetti to use at home next time I see it.

After visiting Zizzi’s I found this seemingly old allergen menu online so its content may no longer be correct (Edited: The old allergen menu was removed). It is not in the same format as the one provided to me in the restaurant (see photo or click on link above). It states the the Bolognese sauce has wheat in it which therefore contradicts the waitress who said all sauces were gluten free but as I said this allergen menu may not be current. I have contacted Zizzi to ask them if they have plans to alter their allergen menu to incorporate adjustments to their dishes to make them gluten free, such as replacing with gluten free pasta or removing dough sticks from their salads to make them gluten free. I’ve also asked them to confirm whether all of their sauces are gluten and wheat free (since the waitress had advised they were). I will update this blog post once I receive a reply from Zizzi’s.

Overall I really enjoyed my trip to Zizzi. The food was tasty and competitively priced. I was happy to see the friendly service was as good as it had been in Whitstable last year. It’s also great that a chain restaurant such as Zizzi’s with over 100 restaurants in the UK now offers gluten free pasta.

I contacted Zizzi to understand how they handle the preparation of gluten free dishes in their kitchens and seek to prevent cross contamination issues.

They advised that all gluten free pasta dishes ordered at Zizzi are made fresh to order in fresh pans using clean water and clean utensils. They also added that “our staff receive food safety training commenserate with their work activities which includes training related to food storage, the avoidance of cross contamination and regarding allergens.”

I passed my feedback to Zizzi that I found their allergen menu to be quite confusing. They said “it is very difficult for us to show all substitutions that can be made as our dishes are made fresh to order and many items can be substituted to suit customer’s tastes and allow for any special dietary requirements or allergens.” Whilst I agree it must be difficult to display all the possible combinations in an allergen menu, I’m sure there must be a way to do it. They said my feedback would be passed on to the Marketing department.