At the end of our Turkish adventure, Mr D and I flew home from Istanbul on British Airways. We were lucky enough to fly home in Business (Club Europe). We have a load of BA frequent flyer miles which we thought we ought to cash in since who knows how long BA will be in business if their cabin crew keep on striking.

Despite the cabin crew’s liking for striking, they are always so lovely. This flight was no exception.

When the meal service got underway, our steward came to see me. He said that although a gluten free meal had been ordered for me, he thought the bread it contained looked too much like gluten filled bread and advised me to be cautious with it. He said someone had been dispatched in Istanbul to find gluten free bead and I could tell from the raised eyebrow he was not convinced it had been successfully acquired.

So, step forward Mr D, guinea pig extraordinaire. I felt like a medieval King who had a food taster in his employ to check the food for poison before the King ate it.

Here’s the appetiser I was served, you can see the disk of bread: 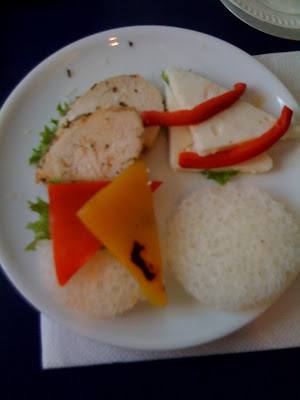 With baited breath, I watched Mr D take a bite of the dubious looking ‘bread’. He proclaimed “that isn’t bread. And it certainly isn’t Genius bread”. So good news and bad news, then.
Appetisers were nice, especially since I had a glass of something fizzy.
The main meal came along: 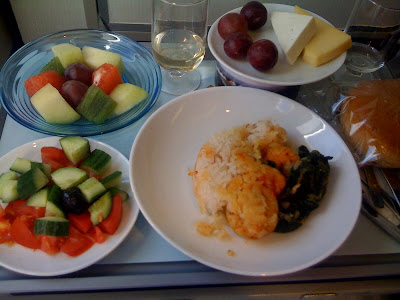 What was on the menu?
– Tomato and cucumber salad (with one rogue black olive)
– Spicy prawns and spinach with rice
– Fruit salad
– Cheese and grapes
– (Turkish) gluten free bread roll
So how was it? Well, guess what? There was actually some spice in the prawns so not a bland gluten free meal for a change. The spinach had been cooked with some onions and had a reasonably deep flavour.
I have to confess the cheese and grapes were a slight addition to my meal. I think the steward took pity on me and my fruit salad for dessert – Mr D had a chocolate and caramel cheesecake with raspberry compote – and so slipped me some extra cheese.
And as for the bread….Well after 10 days of watching Mr D devouring loaf after loaf of bread with hummus and other exciting dips, I found myself strangely interested in eating the rather odd tasting Turkish gluten free bread. Odd. That’s the only way I can describe it. Not massively unpleasant, just not what I would ever buy. Imagine a rice cake crossed with gluten free white bread and that’s more or less it.
It’s easy to knock BA, and I’ve certainly avoided booking flights with them until the current cabin crew dispute is resolved, but they were friendly, professional and served a great gluten free meal on the flight back from Istanbul.